WHEN CALLS THE HEART: Troubled Hearts Come to Hope Valley 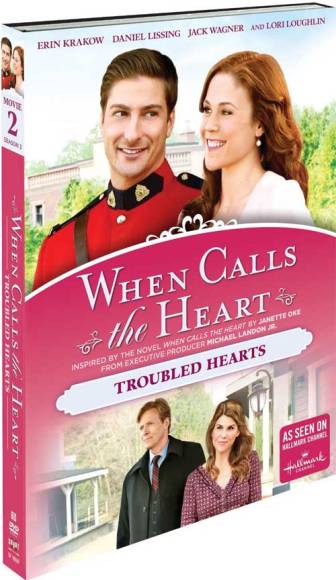 Coming to DVD from SHOUT! Factory is the next installment of what has become a series favorite of fans everywhere with The Hallmark Channel’s WHEN CALLS THE HEART: Troubled Hearts.

Life is finding its beat again in Hope Valley as school teacher Elizabeth Thatcher (Erin Krakow) and Mountie Jack (Daniel Lissing) have finally admitted their feelings for one another. Elizabeth decides that it’s time to put down roots and makes arrangements to move from the Hotel to her own rowhouse.

Jack is thrilled that they might finally be able to share alone time without the well meaning interruptions of their friends. Rosemary (Pascale Hutton) is also putting together a life for herself and love Leland Coulter (Kavan Smith). When she discovers that there might be financial problems for Leland, Rosemary makes it her priority to help in being a part of his life. 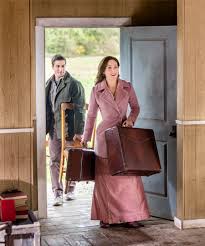 Abigail (Lori Loughlin) is continuing to take care of the boy Cory (Carter Evancic) while his sister mends at Union Hospital. If that wasn’t keeping her busy enough, Mayor Gowen (Martin Cummins) has decided to sell his share in the cafe to a man who wants to take over and that catches the eye of Bill Avery (Jack Wagner). Abigail has also learned the truth about Pastor Hogan (Mark Humphrey) and must decide what is best for the town.

Even all of this doesn’t compare to the seriousness of a gang of robbers who are threatening one of Hope Valley’s own and putting others in danger!

Krakow as Elizabeth has come into her own. Wanting to make Hope Valley her permanent home it is good to see her take the initiative. Trying to prove this is the right move and show Jack she is able to be a teacher and a home maker. Krakow is such a delight! Lissing as Jack has seriously won the hearts of all the female fans of the show. He is dashing and daring as the town Mountie who makes it his business to know what is happening and who to keep and eye on. He is also handy, level headed and trustworthy and the people of Hope Valley trust that. Lissing makes it all look so easy!

Loughlin as Abigail finally resolves the relationship with Bill and turns her attention to Pastor Hogan knowing it is time to discover what has him so rattled. She is also caring for Cory who is acting out and having a difficult time adjusting to family life. Finally, Loughlin brings it all together with her charming smile and believability. 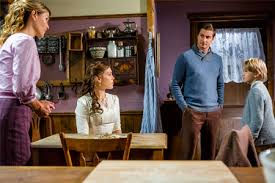 Hutton as Rosemary is silly, charming, and hilarious. She is the comic relief but at the same time wants to be taken seriously regarding her relationships and her advise. I just love Hutton’s portrayal because this character truly does have a big heart. I have to say I was thrilled when Smith as Leland and Rosemary got together. They are such a great balance for each other.

Wagner as Bill is back and although no longer a law man, has made Hope Valley his home. Mending fences with soon-to-be ex-wife Nora (Kristin Wagner), Bill sees a light at the end of a tough tunnel. Cummins as Mayor Gowen is still as grumpy and greedy as ever yet has a soft spot for Nora.

Humphrey as Pastor Hogan has a secret and it is one that puts a strain on the friendship with Abigail. Deciding how to handle it, the Pastor tries to leave Hope Valley. Humphrey gives Pastor Hogan a gentleness and a feeling of atonement that is exactly what we have all come to love about this town. Evancic as Cory it a little boy who doesn’t know how to trust people so that he can settle into a good life with Abigail who truly cares for the young boy.

Other cast include: Larissa Albuquerque as Katie, Aren Buchholz as Jesse, Erica Carroll as Dottie, and Genea Charpentier as Laura.

SHOUT! Factory is a fantastic company devoted to producing, uncovering, preserving and revitalizing the best in pop culture. Sharing music, television, and film favorites with those who want to expand their media library the world over. SHOUT! Factory brings feature films, classic and contemporary television series, animation, live music and box sets in several media platforms. 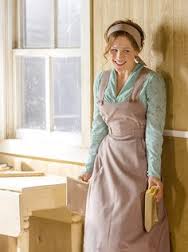 TUBS OF POPCORN: I give WHEN CALLS THE HEART: Troubled Hearts four tubs of popcorn out of five. It is such a thrill with each DVD that I get to review because I am admitting right here and now that this series is a guilty pleasure for me. It has love, relationships, friendships, loyalty and a little bit of camp and comedy all rolled into characters that I have come to truly enjoy.

Having the setting in a small town you can easily believe that the events that happen will catch the ear of every resident. That’s what happens in a small town! The setting is quaint, the costuming is truly brilliant and lends to the era and making the series even more enjoyable.

This series was inspired by Janette Oke’s and her books WHEN CALLS THE HEART and brought to television by Michael Landon, Jr. The series first aired in 2014 and continues to gain momentum with fans talking about the show and getting their friends and family to watch! WHEN CALLS THE HEART: Troubled Hearts has a running time of 84 minutes and has earned the Family Approval seal.

In the end – the residents of Hope Valley are a family!

WHEN CALLS THE HEART: It Begins with Heart Starts with Love 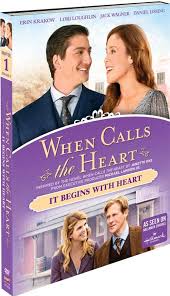 Coming to DVD from SHOUT! Factory is the next episode of the highly anticipated and beloved series with WHEN CALLS THE HEART: It Begins with Heart.

With the parting shot of the last episode in Hope Valley, Jack (Daniel Lissing) is shocked to see Elizabeth (Erin Krakow) in the schoolhouse with Charles (Marcus Rosner) on bended knee. When Elizabeth gives him an answer she looks for Jack who is in the woods and he isn’t happy.

Abigail (Lori Loughlin) becomes attached to two orphan children as brother Cody (Carter Evacic) needs help with his seriously ill sister. She also has been keeping her relationship with the Pastor Frank (Mark Humphrey) but that brings suspicion as well when a stranger arrives. When a wanted poster is seen trouble is not far behind. 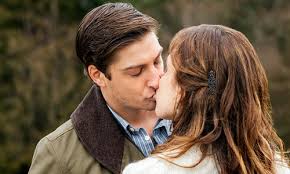 Gabe Montgomery (Mitchell Kummen) it still as grumpy as ever but now sees a little bit of hope for a life with Nora (Kristina Wagner) once she sets things right with Bill (Jack Wagner).

Bill (Jack Wagner) and Jack finally put an end to the mystery surrounding why there was jail time for Bill and what was really happening within the Mounties. That leaves Bill deciding what is in store for his future.

Rosemary LeVeaux (Pascale Hutton) wins a contest about life on the frontier and when a reporter from The Herald comes to Hope Valley to write a story. Leland Coulter (Kavan Smith) has agreed to help Rosemary put the town together for a little New Years Eve celebration – what he didn’t intend was to be overwhelmed by it all but still loving Rosemary.

But that’s what happens when love plays with the heart.

Krakow as Elizabeth is still stunning and once again isn’t about to give up on her life with Jack. Although they seem to hit constant bumps in the road in their relationship, she is strong and sees Hope Valley as the home she will stay in and support.

Jack (Daniel Lissing) wants to do what’s right in his relationship with Elizabeth but isn’t sure that Charles is completely out of the picture. Being a gentleman he wants to be sure and gives Elizabeth enough room to decide. As the Mountie for the town of Hope Valley he believes in protecting his friends and trusts those who, at the moment, no one else does.

Hutton as Rosemary is still as precocious in her ways with attention seeking. She is adorable but might want to rethink how she handles people. The funny thing is that Smith as Leland seems to understand her better than anyone else in Hope Valley and adored by her. These two really balance each other out.

Loughlin as Abigail is keeping the cafe running but when she comes involved with two orphans, it seems to put her relationship with the pastor on the back burner. Speaking of the pastor, Humphrey as Frank has made himself at home in Hope Valley but that won’t last long as a wanted poster may be his undoing.

SHOUT! Factory is devoted to bringing the best of pop culture to fans. From feature films, classic television series, animation and comedy specials are all available to add to your own home library. To see more of what they have to offer please visit http://www.shoutfactory.com

TUBS OF POPCORN: I give WHEN CALLS THE HEART: It Begins with Heart four tubs of popcorn out of five. First of all I can proudly say I am one of the loyal watchers! Yes, we want to know where Jack and Elizabeth are headed, we are suspicious of new characters who may want to bring harm to the beloved Hope Valley and, lets face it, we just love the town itself!

The storyline continues to expand the characters into new directions and as the town grows more characters are being brought in. There is a group of ladies who I speak with about the show and they are already telling me how they hope things happen in the next storyline. It will be interesting to see if their wishes come true. We all know Jack and Elizabeth are on top of the wish list because we all love wedding bells and those bells ringing in Hope Valley would be awesome.

Inspired by the books written by Janette Oke, the series began airing in the United States in 2014 and quickly found a loyal following of fans who love the storyline. WHEN CALLS THE HEART is executive produced by Michael Landon Jr. and can be seen on The Hallmark Channel.

In the end – it always begins with heart!