THE HANDMAIDEN Brings Beauty and Twists

This week in theatres is a stunning story by writer/director Chan-wook Park along with  Amazon Studios with THE HANDMAIDEN.

Set during the Japanese occupation of Korea in 1930, a young pickpocket name Sook-Hee (Kim Tae-ri) is sent to be the handmaid of Lady Hideko (Min-hee Kim). Living on a beautiful estate, the two women lean on one another for friendship. It is clear that Lady Hideko is unhappy being at the beck and call of her Uncle Kouzuki (Jin-woong Jo).

Arriving to sweep the Lady off her feet is Count Fujiwara (Jung-woo Ha) but this slick dresser is not all he seems. Knowing that she has wealth of her own, it is more reason for the Count to lay it on thick. What he doesn’t know is that the two women have begun a relationship of their own in secret.

But everything begins to twist as the Count convinces Lady Hideko to run away and get married. Knowing that the twisted Uncle Kouzuki would never allow the Lady to leave his presence, everything escalates quickly.

Part of the deal is that Sook-Hee join the couple in their escape. Devastated that the Lady has chosen the Count, the handmaid goes as a protector. Once arriving in their hiding space, the wedding takes place quickly and a satchel of money is not far behind. Trying to cover their tracks, the couple pull a fast one and get doctors to agree that Lady Hideko needs to be in an institution.

But who is actually crazy? Sook-Hee for taking the position as handmaiden? Lady Hideko who knows more than she’s telling? The two women together having a forbidden relationship? The Count who is less than he seems? The Uncle who has a disturbing secret?

It all begins with a handmaiden.

Kim as Lady Hideko is stunning and brings all the grace one would expect from a her character. Being turned every which way from an Uncle who has serious issues, she is looking for any way out of her life. I swear keeping up with Kim’s Lady Hideko was a challenge and a happy one at that.

Ha as the Count is slick in every way possible, from his character to his clothing. From the moment he decides the goal of getting Lady Hideko until the very end, I was completely riveted by his performance. That isn’t surprising however as I have come to appreciate his work with KUNDO: Age of the Rampant in 2014 and CHRONICLES OF A BLOOD MERCHANT in 2015.

Jo as Uncle Kouzuki is a character that is seriously twisted and shocking in many ways. As the tale unfolded my jaw dropped a time or two with where the story goes. Jo however is another actor I have come to know because of the two films THE FRONT LINE in 2011 and THE ADMIRAL in 2014, if you have the opportunity to see these films – do it!

The winner for me is Tae-ri as Sook-Hee. This young actress carries such a heavy role for her first time out in a major film. From beginning to end Tae-ri portrayed her character like a seasoned professional. Every gambit of emotion is not wasted on Sook-Hee as Tae-ri tells us a deeper story with every expression on her young face. Stunning!

Director Chan-wook Park has consistently brought amazing storytelling to the screen. From the 2003 film OLDBOY to the 2005 Lady Vengeance to one of the best horror films and one of my favorites to this day with the 2009 film THIRST. 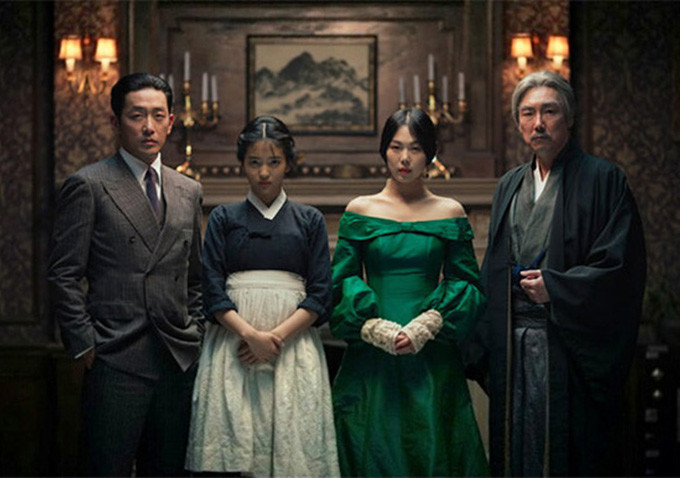 TUBS OF POPCORN: I give THE HANDMAIDEN four and a half tubs of popcorn out of five. This film is cleverly written and stunningly executed by director Park. The cinematography is rich and beautifully done adding to the layers of the film. Speaking of those layers, each is filled with love, plot twists, eroticism, uncomfortable moments, revenge and transformation of characters as it all comes together to a heightened ending.

I have to say that I absolutely loved the costuming and it added to the divide between the Lady and Sook-hee but even the fabric fell eventually. These two women are caught up in the whims of men and their treatment isn’t that far off from each other. Remember that as the story develops to see strength of the mind become the smile at the ending.

In the end – never forget who you are!