IP MAN TRILOGY on Bluray is Beyond Awesome!

Coming to Bluray from Well Go USA and director Wilson Yip is the spectacular collection of films with Donnie Yen returning in the IP MAN TRILOGY.

In IP MAN it is 1937 during the Sino-Japan war as Grandmaster Ip is put to work as a laborer in a factory. When the enemy uses him to fight in matches, no one can beat him. When Japanese Col. Miura (Hiroyuki Ikeuchi) decides he wants to fight Ip, it is that fight that has the villagers wanting to fight for their own freedom!

In IP MAN 2 Master Ip opens his own martial arts studio in Hong Kong that is occupied by the British. Teaching his Wing Chun style of fighting it is Master Hung (Sammo Hung), another martial arts instructor who isn’t going to allow him to continue. Wanting Ip to prove he is a Kung Fu master, a “King of the Ring” match is set with Twister (Darren Shahlavi) in a match that will decide it all.

In the final film IP MAN 3, it is 1959 and gangsters are brutalizing the villagers and they are led by Frank (Mike Tyson) who is determined to take over everything. One of the property’s owned by the brutal developer is the school Ip’s son attends. It is hard to handle the violence as Ip’s wife is very ill. Eventually Master Ip must face Frank in the final match for the title of Wing Chun Grandmaster!

Donnie Yen as Ip has cemented his place in cinema history. He not only brought back an interest in the Wing Chun form of martial art but was recognized by Ip Chun (son of Ip Man) for portraying his father in the films. What might surprise most about Yen is that he comes from a family of martial artists. Yen’s mother, Bow-sim Mark, is a Tai Chi grandmaster in Fu Style Wudangquan and sister Chris is a martial artist/actress who was in the film ADVENTURES OF JOHNNY TAO.

Director Wilson Yip has collaborated on a total of five films with Donnie Yen and that’s basically because he’s awesome if we are being honest here. Yip began in 1995 with 01:00 A.M. leading up to one of my favorites with the 1998 film BIO ZOMBIE and 2004’s THE WHITE DRAGON. Four years later Yip began his history making film IP Man in 2008, 2010 and five years later in 2015. I personally couldn’t be happier.

Well Go USA Entertainment is an amazing company that brings the best of Action and Independent films from around the world. There format includes theatres, digital, cable and VOD along with Bluray. For more of what they have to offer go to www.wellgousa.com.

TUBS OF POPCORN: I give IP MAN TRILOGY five tubs of popcorn out of five. Yen is the reason for each of these films to be so successful because he has the absolute perfect demeanor to play this role. Displaying a calmness that is believable it is almost eerie.

This is a fantastic opportunity to revisit the Ip Man series again but also for those who never had the opportunity to see all three films. I personally would gather up friends and make it a marathon with a mixture of both groups. The crisp beauty of Bluray gives each and every moment the cherry on the cake waiting for Ip to kick it off!

The Bluray includes the Bonus Features: IP MAN Making Of, Deleted Scenes and Trailers; for IP MAN 2 is Making Of and Trailers and IP MAN 3 has Two Hours of Exclusive Interviews with Donnie Yen, Mike Tyson Jin Zhang and more!

In the end – the best martial arts trilogy of all time! 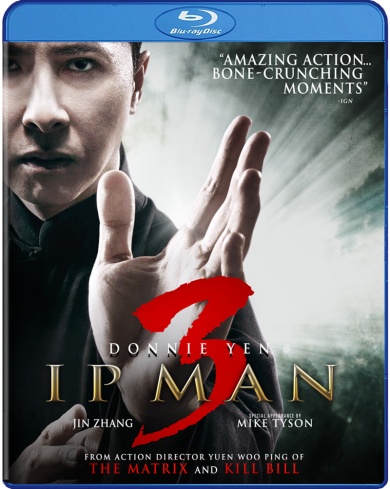 Coming to Bluray from director Wilson Yip and Well Go USA Entertainment comes the highly anticipated continuation of the story of IP MAN 3.

Ip Man (Donnie Yen) has settled down in 1959 Hong Kong with his beautiful wife Cheung Wing-sing (Lynn Hung) and their young son. Proud that their son is receiving proper schooling, Ip Man is upset to learn that a developer Frank (Mike Tyson) wants the property.

Ip Man turns to the police for protection and even police friend Fatso (Kent Cheng) but knows they are being bought off. Keeping his attention on the problems of the school, Ip Man doesn’t realize there is someone else who will be challenging him.

Cheung Tin-Chi (Jin Zhang) believes he is the true Wing Chun Grandmaster. Not happy with the press Ip Man receives, Tin-Chi catches on to the media game and uses it to call out the beloved Master for a match.

Ip Man chooses to ignore the fuss from Tin-Chi as he concerns are more for the community and his wife who needs him more now than she ever did before.

He knows where a man’s loyalty truly lies!

Yen as Ip Man once again turns in a brilliant performance as a man who takes a stand but only when necessary. This isn’t a kung-fu crazed person who goes around flexing his muscles to prove what a bad ass he is. Instead, this is a calm spiriting man who loves his family, community and wants to help where ever he can. All of that is portrayed by Yen beautifully and I’m so pleased no one else took this role. Everyone is excited knowing Yen will be seen even more with his role in ROGUE ONE: A Star Wars Story coming this December.

Hung as wife Cheung Wing-sing is supportive and loving towards her husband. When the school begins to take time away from home, she tries to find a way to reach him. Hung’s character doesn’t have to wait long before she must choose to let her husband finished what the thugs have started or speak up about a secret she is caring with her. Hung is hauntingly beautiful and when she does confront Ip Man – my jaw drops.

Zhang as Cheung Tin-Chi is powerful even if misguided. Zhang portrays a dark character who believes that fighting everyone will get him the one fight he wants. When Ip Man doesn’t come running it only angers him more. Zhang gives this role anger that is bubbling just below the surface until the match that decides who truly is Grandmaster.

Tyson as Frank turns in a quiet performance, that is until his fists start talking then it’s a nice match between Tyson and Yen!

Well Go USA Entertainment is an amazing company that brings the best of Action and Independent films from around the world. There format includes theatres, digital, cable and VOD along with Bluray. For more of what they have to offer go to www.wellgousa.com.

TUBS OF POPCORN: I give IP MAN 3 four tubs of popcorn out of five. I absolutely love Donnie Yen in this role. He has the mannerisms, the look, the joy and the skill that just brings so much to this character. There is such in depth storytelling here. It is not simply one story, but a story that challenges his family, marriage, community and life of kung fu.

The cinematography is so beautifully done which combines the quickness of martial arts with the slow movements that are just stunning to watch.

The Bluray includes the amazing bonus features of Making of Featurette, Interview with Donnie Yen & Mike Tyson and Behind the Scenes. IP MAN 3 is in Cantonese with English subtitles with a running time of 105 minutes. For fans of the original IP MAN film, this is a fantastic way to have all three in your media library.

In the end – this is the story of the real Wing Chung Grandmaster!