Bring all Your Monsters to See HOTEL TRANSYLVANIA 3: Summer Vacation

In theatres this week from director Genndy Tartakovsky and Sony Pictures Animation is a return to visit one of our favorite monster family’s at HOTEL TRANSYLVANIA 3: Summer Vacation.

The hotel is busier than ever as Dracula (Adam Sandler) and daughter Mavis (Selena Gomez) miss spending family time together. Son-in-law Johnny (Andy Samberg) thinks Mavis’ idea of a family vacation is fantastic and along with son Dennis (Asher Blinkoff) pack immediately. 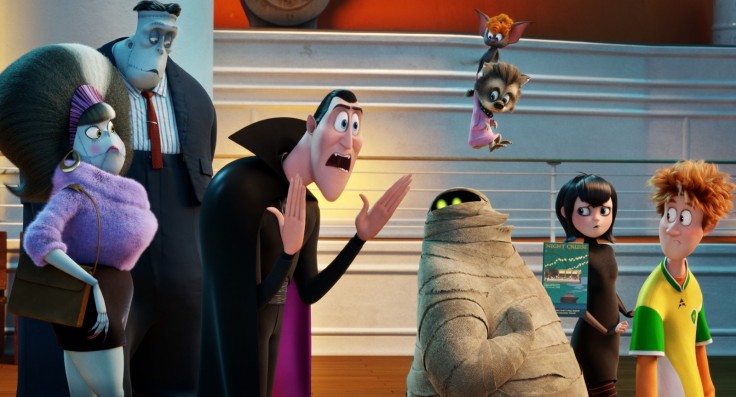 At first Dracula isn’t thrilled about the idea but when Mavis implores him to use the time for family, he can’t exactly turn her down. Captain Ericka (Kathryn Hahn) welcomes everyone aboard and promises them a fantastic vacation. Seeing all the ship has to offer, the gang is excited. Even Dracula changes his tune when he sees Erika because the one thing he thought would never happen is happening – zinging!

Worried how Mavis will react, he keeps his feelings under his proverbial cape. What he doesn’t know and that’s who is hiding below deck, what plans are taking shape and more importantly – who is Bob?

All of this and more will be answered because after all – they are family!

Sandler as Dracula once again puts on the cape to run the hotel and spending time being a good Dad and Grandpa. Wanting to spend more family time, the monster cruise is certainly something different. It’s good to see Sandler keep his character goofy and loveable even for a vampire.

Gomez as Mavis wants to spend quality time with the family having fun. Having her father ‘zing’ certainly isn’t on her itinerary. It doesn’t help that her suspicions about the ships captain are accurate but everyone deserves a second chance.

Hahn as Captain Erika is nimble, fun and very sneaky. She has her eye on Dracula but zinging isn’t why! Erika’s story of hereditary, history and revenge but she also hasn’t met anyone like Dracula.

Frank, Eunice, Wayne, Wanda, Griffin, Murray all return because this wouldn’t be HOTEL TRANSYLVANIA without them. They bring fun, charm and a gentle reminder that extended family hold an important place in our lives. This bunch is so loveable that I was “awing” every five minutes. This is a monster family that started it all and continues to keep us together.

Shout out to Mel Brooks as Grandpa Vlad for bringing the jokes and fun on deck. Of course any time Mel Brooks shows up to a party it’s going to be awesome!

Other cast include Chris Parnell as Stan, Joe Jonas as The Kraken, Chrissy Teigen as Crystal, Aaron LaPlante as the Gremlin, Genndy Tartakovsky as Blobby, Sandie Sandler as Winnie, Sunny Sandler as Sunny, Tara Strong as Frankenlady, Libby Dickey as Lucy, and Joe Whyte as Tinkles.

HOTEL TRANSYLVANIA 3: Summer Vacation makes the difficult look easy in that the story is fresh and fun while leaving us the characters our own family’s have come to love. The comedy is there, family issues about our busy lives and, of course, how love shows up at the most unexpected time and place – no matter if your one or one thousand years old.

It is so easy to forget these are ‘monsters’ when there situations are not so different than our own. Another reason this series of films has and continues to be embraced by family film goers. It’s a film we can take our kids to see while still being kids ourselves.

So pack up your own brood and prepare them all for popcorn, fun and loads of giggles. HOTEL TRANSYLVANIA 3: Summer Vacation is everything and so much more.

In the end – family vacations can suck the life out of you!

HOTEL TRANSYLVANIA 2 Brings the Drac Pack Back on Bluray! 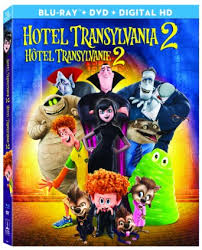 It’s Johnny that isn’t feeling very loved as Mavis is totally dedicated to little Dennis. Vampa Drac is feeling a little out of sorts waiting for Dennis to show signs of carrying on the family legacy. When Mavis announces that it might be better if they left the hotel, Johnny manages to talk Mavis into visiting his home while Vampa Drac takes care of the boy. 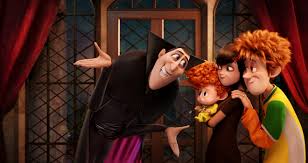 Visiting his parents, Johnny shows Mavis what life outside the castle is like. From small town living to a thrilling trip to the mini-mart, Mavis is excited about the world she didn’t know existed.

Knowing the clock is ticking, Drac’s first stop is ‘monster-in-training’ boot camp that doesn’t go exactly as planned – unless you like posting video to YouTube! All of this to keep Drac’s father Vlad (Mel Brooks) from finding out that Mavis married a human and his grandson isn’t a pureblood.

Sometimes families can be draining!

Gomez as Mavis is now a Mommy and takes that job seriously. Samberg as Johnny thought he’d have Mavis all to himself but with the arrival of little Dennis he starts to feel a little neglected and looking to the birds for friends. Blinkoff as Dennis is just so adorable to listen to! He is also a little boy who wants to make both sides of his family happy and still wants to fly! A red-headed baby vampire is just to awesome!

James as Frankenstein is hilarious as usual, Key as Murray brings the love, Buscemi as Wayne can be counted on with the one liners and Spade as Griffin takes no nonsense – unless he’s the one giving it.

Sandler as Vampa Drac brings back the same love and attention for little Dennis that he continues to have for his daughter Mavis. Saddened that she would think of leaving him and the hotel, Drac will do anything to keep them home. Wanting Dennis to carry on the family tradition, he realizes that means letting his family be who they are.

Brooks as Vlad is hilarious because that is the last character I would imagine him playing. I adore Mel Brooks and have for more years than I care to count. His line delivery is pure magic, but then again Brooks could read a phone book and I’d be thrilled.

Sony Pictures Home Entertainment encompasses motion pictures, television and digital content that offer so much to those wanting to expand their home entertainment library. To see more of what they have to offer please visit http://www.sonypictures.com. Sony Pictures Animation has not only brought the gang from HOTEL TRANSYLVANIA but is responsible for CLOUDY WITH A CHANCE OF MEATBALLS, both of THE SMURFS films, The Academy Award nominated THE PIRATES! Band of Misfits and one of my new favorite holiday films ARTHUR CHRISTMAS. For more information on what Sony Animation will be bringing in 2016 please visit http://www.sonypicturesanimation.com.

TUBS OF POPCORN: I give HOTEL TRANSYLVANIA 2 four tubs of popcorn out of five. Talk about happiness in a dysfunctional family, the story here would work even if they weren’t monsters – I’m just thrilled that they are. Having watched Mavis grow up from the first HOTEL TRANSYLVANIA, Dennis is a joy to experience! Of course I think so because my own granddaughter is a redhead so I am a tad partial.

The best part of this film is that every member of the family can enjoy the charm, humor and love that is in every part of the storyline. The animation is fun and brilliantly done, the casting takes fun to a whole other level. That’s also what makes HOTEL TRANSYLVANIA 2 such a treat – the humor reaches every tickle bone and tubs every heartstring.

The Bluray includes Sing Along with Monster Scary-Oke!, Deleted Scenes, Make the Scary Silly Sounds of Hotel Transylvania 2, How to Throw the Ultimate Monster Party, How to Draw Your Favorite Characters, The New Guys: Meet Vlad, Dennis, Kakie and More!

I am a fan of having an animated section to the home media library and with grandkids I’d probably be disowned if I didn’t. Get ready to add more fun, laughs and love with the Drac Pack and pick up your own Bluray copy (which by the way is stunning to look at) of HOTEL TRANSYLVANIA 2 on Tuesday from Sony Picture Home Entertainment and Sony Pictures Animation.

In the end – they are back to raise a little terror!