CAREFUL WHAT YOU WISH FOR

Coming to theatres this Friday from director Elizabeth Allen Rosenbaum and Big Air Studios comes the truest statement ever made when told to CAREFUL WHAT YOU WISH FOR.

Doug Martin (Nick Jonas) is a young man who likes hanging out with his friends and earning extra money working on boats. Along with friend Carson (Graham Rogers) they plan to enjoy every moment of the sunshine before Doug goes off to college.

Moving in next door is Elliot Harper (Dermot Mulroney), a man who has plenty of money and hires Doug to work on his boat. That is when he meets Harper’s wife Lena (Isabel Lucas) who is very young and extremely beautiful. Harper treats his wife more like a possession and Doug sees right away that she isn’t very happy. 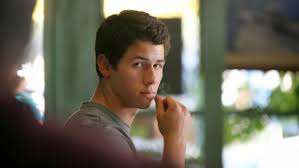 It doesn’t take much for Lena to seduce young Doug and an affair begins between them. As each encounter becomes more and more dangerous, Lena tells Doug that her husband is physically abusive. Talking about a way out of the situation becomes a mute point when a call sends Doug running to Lena.

On the floor is Harper and now the lives of two people are in far more danger as the town lawman Sheriff Big Jack (Paul Sorvino) tries to piece together exactly what has happened. When Angie Alvarez (Kandyse McClure) begins to look for answers before handing over an insurance check, both Doug and Lena do what they must to keep themselves clear.

Jonas as Doug plays the young man in love to the hilt. Wanting to save the damsel from the clutches of her abusive husband, Jonas’ character jumps in without thinking. The consequences are one bad decision after another. I really enjoyed the portrayal of this young man because (and this is important) I forgot it was Jonas! As he unravels the mystery it is cool to watch Jonas go full tilt.

Lucas as Lena is definitely a woman with a plan. Clearly easy to seduce any guy within ten feet of her bikini clad bog, Doug is her man of choice. Lucas has the looks and voice to sell snow to an Eskimo in the dead of winter and that’s what it takes to get the role done.

Mulroney as husband Elliot clearly doesn’t care about anything but himself and maybe his boat. When Mulroney wants to portray a douchebag, he gets into it and lets the narcissist pour out. Well done!

Rogers as Carson is a friend who just wants to be a kid for one last summer. McClure as Angie is looking to find out who is responsible for a death and why they deserve a big fat check! It’s not easy being an insurance rep.

Sorvino as Sherriff Big Jack is the type of law enforcement guy I’d want working on any case I needed help with. He sits back and lets people trap themselves! No pushing or shoving, just calmly collect evidence and ask the right questions with a full coffee mug in his hand. It’s actually good to see Sorvino on the screen again.

TUBS OF POPCORN: I give CAREFUL WHAT YOU WISH FOR three tubs of popcorn out of five. The story is fairly straight forward with a few turns. The interesting part of the film is that it reminded me of the old black and white films of mystery, affairs and the coppers hot on the trail of finding answers. In that respect it is easy to see how the film can capture the audience.

It’s a love thriller with more twists than a pretzel. Of course that means you can’t blink through the entire film or you’ll miss something. This film is well played from start to finish. It is the cast that truly give CAREFUL WHAT YOU WISH FOR some serious chops.